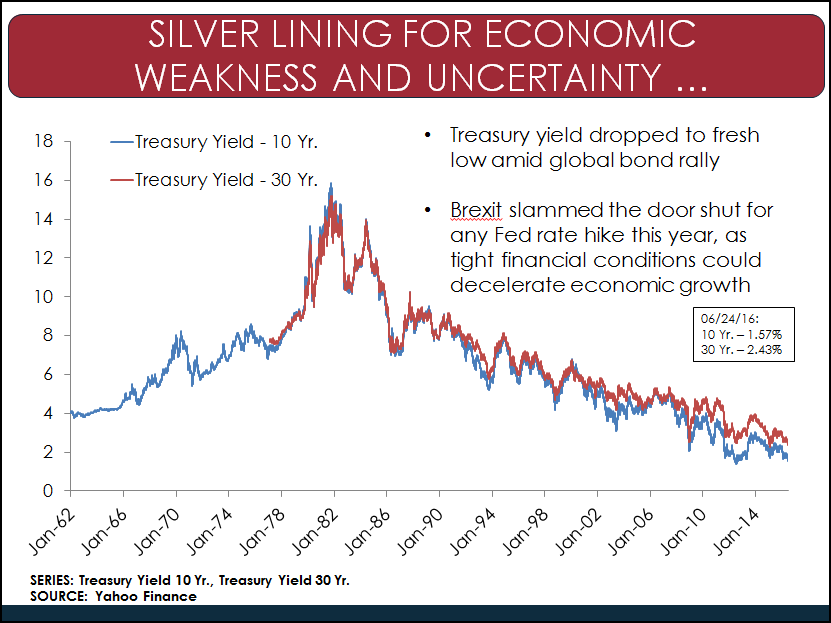 On June 23, 2016, British voters decided that it was about time for the United Kingdom (U.K.) to break loose from the European Union (E.U.), as they voted 52 percent to 48 percent in favor of leaving the E.U.  Global financial markets reacted violently to the “Brexit” decision, with the Dow Jones, S&P, and Nasdaq indices all tumbled 3.4 percent or more on the day the voting results surfaced.

Pound to dollar exchange rate also dropped sharply after the breaking news.  In just a few hours overnight, as the “Leave” campaign gained momentum, the British pound to U.S. dollar rate hit 1.33, reaching the lowest level not seen since 1985.  For US travelers going to the U.K. for vacation, that’s good news.  The drop in the value of the currency means more bucks for your pounds when you are on vacation. But this is bad news for exports from the U.S. to the U.K., as Britons now need to pay more for the same American products, which could mean fewer goods being sold to the U.K. in the near future.

This direct effect on U.S. exports, however, appears to be rather limited, as the U.K. accounted for less than 4 percent of American exports of goods in 2015, which is equivalent to only 0.4 percent of U.S. GDP.  The direct economic impact on the U.S. economy would be miniscule, even if the U.K. economy slipped into recession.

The more significant damages, however, could be coming from indirect effects.  The panic selling in financial markets around the globe was due primarily to uncertainty about the economic conditions of the U.K., the E.U., and the U.S.  The health of the U.K. will take a hit in the upcoming quarters, as existing trade agreements with the E.U. and other countries started being questioned, while business investments to the country will be put on hold due to lack of clarity and confidence in the economic and political environment.

The housing market could benefit from the Brexit outcome though.  Treasury prices soared as investors flocked to the perceived safe haven of government bonds amid a global stock selloff after the U.K. voted in favor of leaving the E.U.  The yield on 10-year Treasury note ended down 16.4 basis points to 1.58 percent and the 30-year yield fell 13.1 basis points to 2.43 percent.  This is good news for homebuyers as mortgage rates follow the same movement of the long-term Treasury yield.  Rates were expected to remain near 4 percent for the rest of the year before the Brexit vote, but the latest development could potentially push rates further down to levels last seen in 2012.  Brexit also pretty much slammed the door shut for any Fed rate hike this year, as tight financial conditions resulting from the meltdown in equity markets could decelerate economic growth in the U.S., as well as many economies overseas.