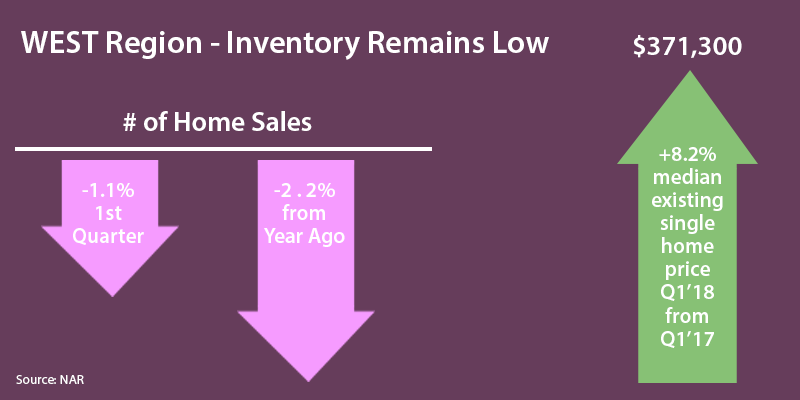 WASHINGTON (May 14, 2018) – Inventory levels hovering at all-time lows weighed down home sales and fueled faster price appreciation during the first three months of the year, according to the latest quarterly report by the National Association of Realtors®.

Single-family home prices last quarter increased in 91 percent of measured markets, with 162 out of 178 metropolitan statistical areas1 (MSAs) showing sales price gains in the first quarter compared to a year ago. Fifty-three metro areas (30 percent) experienced double-digit increases, up from 15 percent in the fourth quarter of 2017.

Lawrence Yun, NAR chief economist, says record low inventory levels caused the housing market to get off to a slow start in 2018. “The worsening inventory crunch through the first three months of the year inflicted even more upward pressure on home prices in a majority of markets,” he said. “Following the same trend over the last couple of years, a strengthening job market and income gains are not being met by meaningful sales gains because of unrelenting supply and affordability headwinds.”

Added Yun, “Realtors® in areas with strong job markets report that consumer frustration is rising. Home shoppers are increasingly struggling to find an affordable property to buy, and the prevalence of multiple bids is pushing prices further out of reach.”

“Prospective buyers in many markets are realizing that buying a home is becoming more expensive in 2018,” said Yun. “Rapid price gains and the quick hike in mortgage rates are essentially eliminating any meaningful gains buyers may be seeing from the combination of improving wage growth and larger paychecks following this year’s tax cuts. It’s simple: homebuilders need to start constructing more single-family homes and condominiums to overcome the rampant supply shortages that are hampering affordability.”