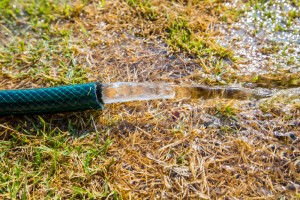 Peninsula property owners, Cal Water’s biggest chunk of South Bay consumers, face some of the steepest reductions in California — 36% of 2013 usage. Palos Verdes Peninsula households have one of the highest water usage per capita, using 255.4 gallons a day, according to state figures.

Cal Water also serves Redondo Beach, Hermosa Beach, Carson and portions of Torrance, where cuts of 16 to 20 percent are targeted. The cuts are intended to help slash water usage statewide by 25 percent.

Cal Water will restrict outdoor sprinkler use to between 6 p.m. and 8 a.m. no more than three days a week and require repairs to leaks within five business days after they are discovered. New and existing violations include hosing down sidewalks and driveways, using a hose without a shut-off nozzle when washing cars and filling or refilling residential swimming pools, except if due to structural repairs or in order to maintin normal operating levels.

Drought surcharges will be implemented for overages, up to $10 for every 100 cubic feet (748 gallons) exceeding limit.